Red Rose FC back in training

Players are needed for all teams. If you want to get back into football, just come along, even if you have never played but just want to give it a go and improve your fitness at the training sessions.

Red Rose girls pleased to be back to training

The girls’ teams of Cawston Red Rose FC have been itching to get back to football for weeks and, along with everyone else, are glad to now be able to enjoy team games, all be it with some strict precautions still being taken.

Many of the girls have been getting their kit ready for our restart.

The club is limiting training to just once a week, on Saturday mornings initially, and will reassess this when our Thursday evening training can start up again. 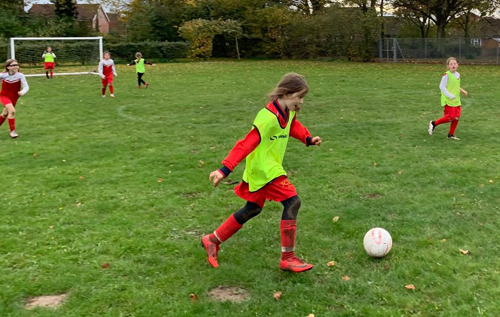 There will need to be some seriously intensive sessions as league football is planned to resume on 17 April for all Red Rose teams.

We are now happy to accept any new girls wishing to have a try at girls-only football.

For more information, please visit the club website, find us on Facebook, or call or text Paul Willmott on 07926 004994.

With the lack of sport resulting in players having to be content with weekly quizzes and competitions, the recent snowfall gave the Red Rose FC managers the chance to issue a new challenge to players: to roll the biggest snow football possible.

As the club caters for players from ages 6 to 13, the challenge was judged against the height of each player, which meant the older, taller girls would need to roll bigger snow footballs.

The girls sent in photos of themselves with their snowballs. At the end of the week the winner was Jessie with a snow football taller than herself (pictured). 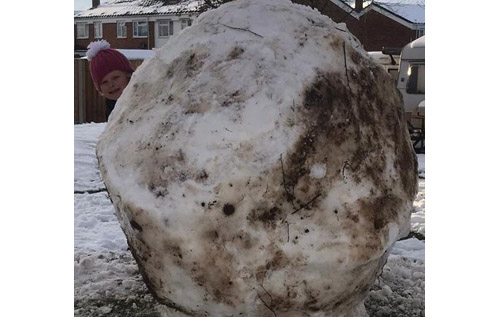 The runners-up were Sahara, Nelly and Elise, all with a football up to chin level, with Aimee winning the cleanest/whitest snow football prize.

It was all great fun and a brilliant way to get the players outside in fresh air again. Hopefully, we will now be back playing soon.

Cawston Red Rose Football Club is hoping to benefit from the Broadland Community at Heart Lottery.

The club provides a football opportunity for girls in the Reepham district from ages 7 to 13 and is the sole “girls only” football club in the area.

Red Rose is a Football Association charter standard club providing an opportunity for girls to play in the local district at any skill level.

Along with most voluntary organisations the club has been hit hard over the past year from a lack of funds and is hoping the new local lottery set up by Broadland District Council will help fill the gap.

The last match the Cawston Red Rose FC girls were able to play before the latest lockdown was a typical match of two halves, as they welcomed visitors from Lowestoft: Waveney FC.

The girls had previously had a few matches cancelled due to the current situation so were pleased to have a game go ahead at last on what turned out to be a perfect day.

The Waveney team started strongly, forcing several corners that were all defended well by Red Rose, with keeper Darcie not much troubled.

As Red Rose settled into the game the pressure lifted and it became more evenly matched, with the home team creating a few more chances in and around the Waveney goal area.

Waveney then surprised Red Rose with a quick break down the left with the wide player outpacing all others and smashing the ball in to take a 1-0 lead.

This was soon followed by another goal and, with an uplift in confidence, the game tipped in favour of Waveney.

Despite the Waveney dominance Red Rose managed to get a goal back with a lovely taken effort by Jasmine.

However, the Waveney team continued to dominate and just before half time a strike from a Waveney player took a wicked deflection and ended up in the net to give a half time score of Red Rose 1 Waveney 3.

The Red Rose girls came out after half time in a different and determined frame of mind and totally took the match to Waveney, pressuring the ball at all times. The effect was immediate with a well-taken goal scored by team captain Hetty.

The pressure continued with Jasmine hitting her second and the Red Rose team’s third goal of the day to bring the scores level.

With Red Rose now controlling the game the girls finally took the lead when Casey shot on target from the edge of the goal area, before Paige put the game to bed with a tap in from almost on the goal line after more Red Rose pressure.

Although football is now currently suspended, full details of all Red Rose girls’ teams and Wildcats training can be found at www.cawstonredrosefc.co.uk

Christmas match with a difference

With the delayed start of football this season, the league had scheduled games for the last Saturday leading up to Christmas, which are normally left free of matches – it was looking like we were not going to be able to hold our usual Christmas parents vs girls football match.

However, one by one each of our opponents cancelled the matches arranged for that Saturday, which meant a hastily arranged (almost) traditional parents’ match.

With the current restrictions in place all activities took place outside and the usual food and drink was not allowed; all parents and players had to be temperature-checked on arrival.

To make it different we played three-ball football with different coloured balls for the various age young players, all playing on one massive pitch, but all scores counting towards the final match result.

The parents’ team took an early lead in (as expected) a high scoring match and were ahead 8-6 by half time. However, with the mums’ and dads’ fitness (or lack of) beginning to tell in the second half, the girls ended up as 13-11 winners in this epic match.

After another massive use of the hand sanitisers the girls finished off the fun day with a snowball fight, most of which ended up being lobbed at the squad coaches, but all in the name of great fun.

Before the current lockdown the girls’ football season was finally able to get going, despite the Covid-19 delay to most sports, with football able to continue with extra safeguards in place.

An understrength Cawston Red Rose Football Club side kicked off the season with a closely contested match at home against a top-of-the-table Taverham team.

Taverham started brightly and showed why they are a top team with several promising attacking moves that could have produced some goals, but for some great saves from goalkeeper Hannah, who was in top form, as well as the opposition strikers being less than clinical in their finishing.

Despites these early scares the Red Rose girls battled on and slowly got into the game as midfield trio Jazzy, Millie and Paige began to control more of the ball and created chances for striker Casey to run onto.

The rest of the first half was more evenly contested until just before the half-time whistle when Taverham at last managed to beat keeper Hannah to take a 1-0 lead.

A change of formation by Red Rose for the second half saw a new goalkeeper and a revamp at the back, but Taverham had at last found their shooting boots and despite several good saves by keeper Hetty, Taverham moved into a 3-0 lead.

However, heads did not drop and Red Rose hit back with Hannah, now playing as a striker, pulling one goal back with a brilliant run from a feed in by Elise and then smashing the ball into the net.

Shortly after, Hannah scored again from a brilliantly taken free kick to bring the score to 3-2 and the chase was on to get an equaliser.

With Hetty keeping all the shots out at one end and Red Rose pushing hard for an equaliser the match went from end to end until Taverham managed to make the game safe with a fourth goal, which made the final score Red Rose girls 2, Taverham girls 4.

The player of the match was deservedly given to Hannah, but each player contributed brilliantly towards what was an excellent result against the top team.

Most importantly, the whole team had an enjoyable match, with our opponents proving to be a great team and perfect guests.

Red Rose girls’ teams are still open to all players, of any skill level, in school years 7 and 8 and also years 3 and 4.

Both our year 5 and year 6 groups are now full, but we are taking names on the waiting list for these groups.

Event information may be out of date owing to coronavirus (Covid-19). Please confirm details with event organisers