October’s photograph from the Reepham Life 2019 Calendar shows a very quiet picture of Norwich Road, Reepham, in the early 1900s (probably on a Monday, judging by the washing hanging out). 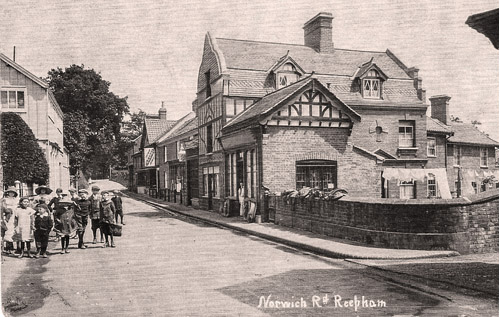 The first building on the right housed a harness maker, John Rooke: saddles and harnesses can be seen draped over the wall. He later moved to Cawston, but kept a shop on the other side of the road, which can be seen on the left in the picture below, taken later. 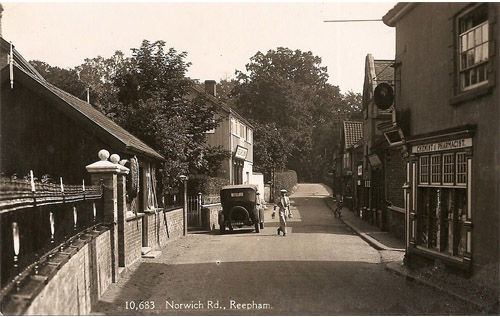 The railings in both pictures have disappeared, but the holes in the top of the wall, in front of the modern houses, can still be seen.

The ground where John Rooke built his new shop was at one time a garden belonging to Jesse Bircham, the chemist whose shop can be seen in the second picture.

Jesse’s mother Hannah had worked for Thomas Staples, another chemist, for many years and carried on the business after he died in 1858. Jesse joined the business with his mother in the 1890s and continued until his death in 1925.

Further along on the right was the house lived in by the Beaver family. Still called Beaver House, it was bought by Catherine Gooch’s father when she married Arnold Beaver in the 1890s and Arnold ran a grocery and drapery, and also sold household furnishings and tea.

Arnold later became an assessor and collector of taxes and in 1922 was appointed a Justice of the Peace.

Around the time of the calendar photograph, other occupants of Norwich Road included a veterinary surgeon, a grocer and draper, a boot and shoemaker, Salvation Army officers, a plumber, a painter/decorator and later a butcher, whose shop was in the building behind the children.

The Reepham Archive is open to the public on the first Wednesday and Saturday of the month from 10 am – 12 noon (or by appointment), upstairs in the Bircham Centre, Market Place, Reepham. Email: reephamarchive@gmail.com

Event information may be out of date owing to the coronavirus (COVID-19). Please confirm details with event organisers

See all up coming events.