Recently, a tour guide from York contacted the Reepham Archive enquiring about a strange statue that stood in Reepham in the 1970s. He wrote on behalf of a friend whose family had lived in Reepham for many years.

It was discovered through a chance question to Michael Black that the statue had existed and stood in the yard on Norwich Road where William Lain had a stonemasonry and sculpting business in the premises that now houses Rococo Loco and included workshops and storage in Bircham’s Yard.

William and his wife opened the business in 1972 under the name Walking Man Antiques, specialising in porcelain and small items of furniture. The opening was reported in the Eastern Daily Press in March.

Later that year a further article appeared reporting damage caused by vandals to the Walking Man statue. The seven-foot-high sculpture had fortunately fallen onto a sack of earth, saving it from serious damage but chipping his hat and cape.

The Lain family kindly found some old newspaper cuttings, copies of which were sent to Mr Davies the tour guide and his friend Andrew Hunt, who later wrote of his childhood memories of the statue.

This article has been edited from those cuttings and Andrew’s information will appear in a future item.

The Reepham Archive is open to the public on the first Wednesday and Saturday of the month from 10 am – 12 noon (or by appointment), upstairs in the Bircham Centre, Market Place, Reepham. For more information about opening times and current services, contact the Archive by email. 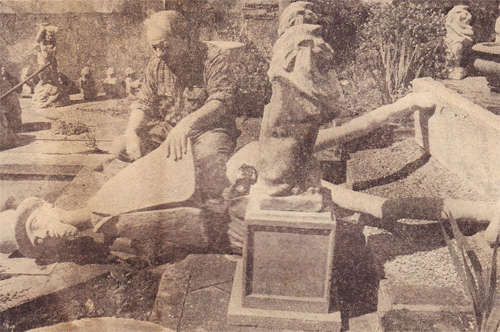 William Lain in June 1972 with the fallen statue. Photo: EDP