Got something to say? Want to respond to a letter? Don't forget to mention the title of the article
Click Here

More thanks to tireless community stalwart

I should like to add my personal thanks to Stuart Lane’s piece (29 October 2021) and what I’m sure are the very many thanks and good wishes to Ann Middlemas on the news that she is stepping down as the Reepham Archive volunteer administrator.

Ann has given tirelessly to the life of Reepham over many years through many activities, including as a member of the town council and as a key member of the Reepham Society committee when it combined with the Bircham Centre to create the Reepham Archive.

I was one of those fortunate enough to work with Ann and to benefit from her constant energy, willingness and generosity in developing the Archive and realising its aim of discovering, preserving and sharing Reepham’s communal history and sense of identity. Thank you, Ann.

There’s an interesting article in the October issue of Norfolk Magazine about Steven Briggs and the restoration work he carries out on ancient buildings around the county.

There’s also a picture of our Reepham churches included which I instantly recognised, but nothing to tell those who don’t know what or where it is (and I have searched the article with a fine-toothed comb), although the images of Great Yarmouth are all captioned.

How can we attract visitors to our beautiful town when even the county magazine can’t even give us a credit?

I do a better job of promoting “Reepham la Belle” on my Instagram page (@joolsline).

At least the photo is captioned on the magazine's website (page 6) – Ed.

In response to the letter by Martin Sullivan (23 September), I was glad to hear from someone who drives on the unclassified county road system, colloquially known as green lanes.

I would be happy to discuss the use of Broomhill Lane and Back Lane with anyone – except the vehicles that drive at speed past my house, do not stop and when they do are extremely rude.

However, I don’t agree that this is a new issue: I was contacted by the son of the previous owner of my house who said it had been a problem for more than 40 years.

It is also clear that the Green Lane Association’s Code of Conduct is not adhered to for this path; for example, members should:

• Avoid damage to trees, hedgerows and boundaries. Some roads carry vehicular rights but are physically too narrow for 4x4s.

• Travel at a quiet and unobtrusive pace and as slowly as practicable; we recommend a maximum of 12 mph when in a 4x4 and on an Unsurfaced Right of Way.

I do find it impolite to be blamed for “overgrown fences” when it is clearly (as evidenced in the photographs in a previous news story) the vehicles that are running over the line of the fence and causing damage to the posts along the path. This section of track is not overgrown at fence level.

The other side of this particular track runs along the lower edge of the school playing field which belongs to a local farmer.

Even if this was cut back (and I am glad that this historic pathway isn’t cut back hard because it would further damage the habitat) it would still not provide enough space for the sort of vehicles that are using it.

Rather than attempting to blame others it would be more useful for anyone engaged in driving these paths to come to a meeting, put their point of view in person and maybe even accept that the green lane vehicles are causing damage to property and the track.

Green lanes are not being maintained

Re: the news item Green lane drivers are a ‘danger to other users and property’

I have been a green lane driver for many years, and I am saddened by what’s happening to these lanes, not only in our area but across the country.

For years I was involved with the Green Lane Association, which has always promoted responsible use of green lanes and has a clear code of conduct, limiting the number of vehicles and the speed at which they are driven.

These runs were family days out and all about enjoying the countryside. So, what’s changed?

In the past few years. the price of used 4x4 vehicles has dropped significantly. This has led to many of them being used “off road” at so-called pay-and-play sites, and unfortunately also went on to mean many drivers looking for the muddiest lanes they can find and causing the inevitable damage we are now seeing.

They appear on the List of Streets, which recognises them as being maintained at public expense.

However, these are NOT being maintained due to current financial constraints.

Further, the overgrown fences that run alongside these lanes are the responsibility of the landowner.

Back Lane is a good example of the failure of the landowner to maintain and cut back the hedges which is why this is now down to the width of a footpath.

It should be noted that both Back Lane and Broomhill Lane are UCRs. The proposed development to build 140 houses here may mean these lanes will be lost forever.

I read with interest Hugh Ivins “I told you so” letter regarding the benches in the Market Place (Your Letters, 14 September 2021).

It is also interesting to note that, on seeing the situation shown in the picture, Mr Ivins, in a blinkered “car centric” way, immediately decided to criticise the town council for placing the bench in the Market Place rather than, as he should have done, criticise the inconsiderate driver who parked so close to the bench that no one could use it.

The Market Place is for all the people of Reepham, including pedestrians and cyclists.

The benches were placed in the Market Place following requests from elderly residents who needed somewhere to rest after walking to the shops. Surely their needs should be considered too.

The town council is very aware of the need for parking in the Market Place to support businesses, but it’s a sad day when drivers are unwilling to sacrifice one space, which is only large enough for a mini, to enable the elderly to have somewhere to it down.

I have been told by a shopkeeper that the benches are used frequently so there is clearly a need for them.

The benches are black to fit in with the conservation area. The litter bins and the posts on the islands are also black, but I am not aware of pedestrians colliding with them at night.

Market Place benches: I said they would not work

I have just seen the two benches in the Market Place – I did say they would not work within the parking area (Your Letters, 18 June 2021).

Fancy sitting down on this one: 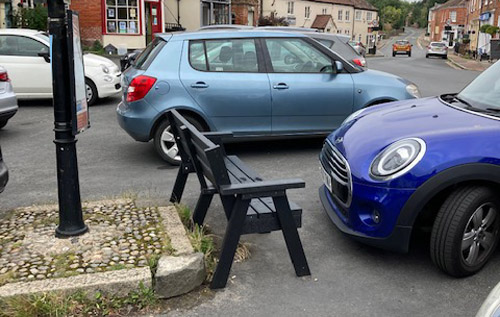 Why are they black? They will not be seen at night unless the square is fully illuminated, which no one wants.

The extra benches should be situated around the edge of the Market Place, within the pedestrian areas, as they are already.

I read in Reepham Life (Your Council Matters, 19 August) a request for ideas to revitalise the market.

Why not follow the example of Holt? They hold their market at the weekend.

So many more people are able to visit as they’re not at work. It would be an “event”, even if it was only once a fortnight.

I lived in Reepham for 35 years and now live nearby; many friends and family still live in Reepham, and we are all saddened by how the market has become.

Surely closing half the Market Place, or more, to traffic on a Sunday and having a wide variety of stalls would attract visitors and locals.

Farmers’ markets are very popular as are craft stalls.

There is a traffic calming system in place in Weston Longville that prevents over-large vehicles driving through the village.

After so many years of damage to the church wall in Reepham, would it be possible to install similar width restrictions on Norwich Road so that anything larger than a van, perhaps, would not be able to drive through?

The drivers of the enormous vehicles that attempt to negotiate the corner of Church Hill cannot realise how narrow that section is.

It also presents a hazard to pedestrians walking to the Spar or the Koti Shop on the corner.

Reepham has tolerated years of damage to the church wall; surely, it’s time to call a halt to vehicles that are obviously much too large to negotiate that section of road.

Delivery vehicles would have to use the New Road/Ollands Road route, which, although not ideal, is far more negotiable than Norwich Road/Church Hill.

Buses would have to use the same route or Station Road, as they used to.

Market Place should be an open space for all

I understand Reepham Town Council is planning to install two benches in the town square, which, from where they will be sited, will not take up any parking spaces at all.

Hugh Ivins (Your Letters, 18 June 2021) seems to believe the Market Place should only be a car park for the preserve of motorists who want to park directly outside a shop.

At present, there is only one bench outside the pharmacy, so have a thought for the elderly who want to take a rest while shopping or other people who just want to sit and enjoy the beautiful Georgian square – which has virtually no pedestrianisation whatsoever.

Mr Ivins fails to understand that people waiting for the bus will be exposed to traffic fumes whether they are seated or standing.

Reepham’s Market Pace should be a space for all – vehicles, pedestrians, cyclists, residents and visitors, not just petrolheads.

Regarding Reepham Town Council’s proposal for two benches by the islands on each side of the Market Place parking areas (Your Council Matters, 14 June 2021), I would be concerned about the health and safety of people waiting on these benches while diesel and petrol fumes are emitted from cars starting and stopping and turning around, and the bus idling in the close vicinity of these benches.

Also, the proposed bench on the Dial House side will still require people to cross the road to the waiting bus, presenting a crossing hazard.

Additionally, there would be no outlook for anyone sitting on these benches when surrounded by parked vans, 4x4s and other vehicles.

I suggest the two benches be placed adjacent to the Bircham House railings, for health and safety reasons and for access to the bus stop and a decent outlook over the Market Place.

If anything, only a short trial run in the proposed locations will indicate any of these issues.

Event information may be out of date owing to coronavirus (Covid-19). Please confirm details with event organisers